A Beautiful Building Needs A Platform

Marketers Should Be Architects

So said John Ruskin, Victorian critic and patron of the arts. What I think he was getting at is that architects have to be multi-faceted – to encompass both the creative and the practical.

We marketers have to be able to do the same.

The architect has an idea following close consultation with the client. The task is not simply to make real what the client imagines, but to show them something better that they couldn’t imagine – to surpass expectations. That takes creativity and empathy.

Buildings that are well designed have a consistent idea flowing through them, a coherent philosophy, from the door-handles to the roofline. They are not disjointed and piecemeal. Buildings that have no design, but are simply thrown up by a builder willy-nilly, tend to be less aesthetically pleasing, less functional and simply not as good.

That initial creativity – the spark of the big idea – can start out life as an inauspicious squiggle on the back of an envelope, as the design for BBC TV Centre in Shepherd’s Bush famously did. Some of Le Corbusier’s early designs began as two or three brush strokes only. There were no plans at all for Frank Lloyd Wright’s iconic house ‘Falling Water’ – dramatically cantilevered over a waterfall – three hours before the clients were due to arrive to inspect them. Frank bashed them out in time because the entire design was perfectly formed in his head. That’s where creativity begins and ends. In our heads, not in focus groups or data sets.

But I can’t help but notice, the real problem here is that B2B agencies have seriously divested in the idea stage and now, too often, go straight to execution. Some even confuse their studio (the execution stage), with a creative department (the idea generation stage). It has all become a bit cart and no horse.

If we are not creative in our thinking, we can only carry out the ideas of others. Builders follow plans and often go awry without them. As marketers we have to be the designers and the builders, coming up with the big idea – the grand design – but also making it a reality using all the specialist trades at our disposal.

Good buildings are built on solid foundations. For our purposes, I’m going to call these platforms. The first platform we need to build is the creative platform. This is the big idea that runs throughout the entire brand proposition. It’s more than just a strapline or a logo.

There are also technology, media and marketing platforms, but the creative platform is the most important – it helps define and inform the others.

The problem is that as we’ve become more short-term in our approach and media has fragmented as new technologies have come along, we’ve almost forgotten the value of the big idea – the central importance of the creative platform. Yet this is the best way of getting into someone’s head and delivers the best bang for your buck.

Whatever you call it, you need it to run consistently through all your messaging – it’s the platform upon which everything else is built. And it needs to be a big idea if it’s going to reach all parts of the sales funnel, from the broad reach stage – advertising, social media, search and PR – right down to the transactional stage.

Remember that 90% of B2B purchasers end up buying from those brands that were known to them at the start of the buying process. If you’re not in the top three at the start, you’re unlikely to get the gig. For many smaller players, that’s quite a depressing thought, which is why we’ve got to think long-term and build a proper creative platform, otherwise you might as well get out of the market altogether. 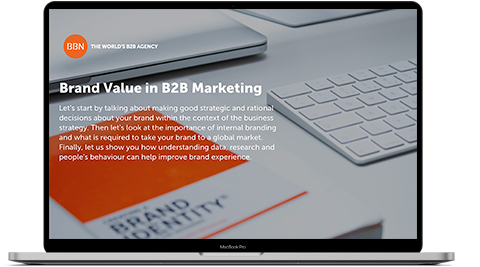